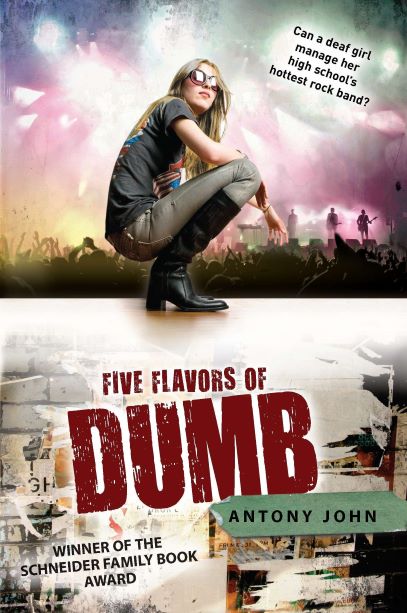 When Antony John’s wife challenged him to write a book about rock music and its personalities from a deaf person’s point of view, Five Flavors of Dumb was the result.

Eighteen-year-old Piper Vaughn lost her hearing in fifth grade. Her speech is pretty clear, and she’s mastered the skill of reading lips.While communication is much easier for her if she uses sign language, only her brother and mom have learned it. Dad is ashamed of his imperfect daughter. However, Piper’s baby sister, Grace, who is also deaf, has just received expensive cochlear implants—paid for with Piper’s college fund. It doesn’t take much imagination to know how she feels. The chip on her shoulder gets her into the sticky situation of managing a high school rock band, Dumb. (That’s the name of the band, not my opinion of Piper!)

The five personalities in the band range from arrogant to oppositional to placating. Piper has her hands full getting them to listen to each other, both on instruments and in life. How can she do that when she can’t even hear the music properly and misses much of what they say? She depends on her feet to feel the rhythms through the floor, but her hearing aids only give her vague clues on the harmonies. With the help of an aging ex-rock singer, Piper fumbles her way through the maze of rehearsals, public relations, and contracts. She gains a better understanding of her family. Perhaps, most importantly, she learns to accept the hand of friendship as well as extend it.

Since Five Flavors of Dumb is not a Christian YA novel, the language can get pretty salty, so I don’t recommend the book for younger readers.

Directly after the first chapter and directly before the last chapter, Piper creates a list which reveals how she looks at the world. When I compare both lists, I can see how much she’s grown in maturity and in loving others, a great lesson for all readers!