Lety Out Loud by Angela Cervantes 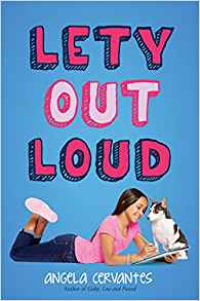 I’m always good for a compassionate tear-jerker of a story, and Lety Out Loud with its sympathetic characters and focus on abandoned pets blessed me with three separate crying jags.

Lety Muñoz is an ESL student fresh out of fifth grade. She loves putting just the right words together—in Spanish or in English–to get the perfect meaning. Although she’s not very good with English yet.

She also loves animals. When she gets to help out at an animal shelter, she volunteers for the position of “shelter scribe,” writing animal profiles to be posted on social media.

But there’s a problem. Hunter, an arrogant boy in her mainstreamed class, also wants the job. Hunter figures he’s a shoe-in  since Lety doesn’t know English as well as he does. However, the veterinarian in charge has them split ten profiles between them. Not satisfied, Hunter challenges Lety to a competition: whoever succeeds in getting all five of their featured pets adopted first, can remain the shelter scribe. The loser scoops dog food.

Both Hunter and Lety work hard to create the best profiles, and as the competition draws to a close, they learn a little more about each other. Lety grows in confidence, and Hunter allows her to glimpse the kind heart under his self-protective armor.

I can’t think of a thing.

Most kids love animal stories, and they also like rooting for the underdog (pun intended).  Lety Out Loud is a sure winner in both categories!