Perseverance: Beauty in the Midst of Ugly 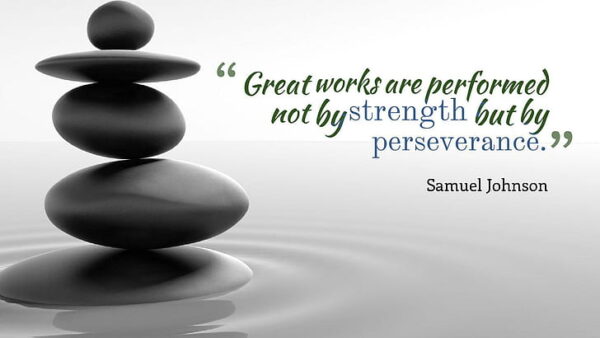 Our fourteen-hour trip from Florida to Indiana had expanded to almost eighteen hours. Despite an overnight break at a hotel, the drive through Georgia with its clogged highways, road work, and multiple fender-benders had exhausted us. But we’d persevered.

Once the bags were unpacked from a week with extended family, I sat on our front porch for a good ole gratitude talk with God.

As I relaxed in ninety-degree heat, I contemplated our magnificent ash tree providing blessed shade. It was probably a young adult in tree age when we moved to this house almost thirty years ago, the most beautiful tree I’d ever seen. Perfectly shaped with no help from a pruning hook, it amazed me with its purple leaves that first fall. 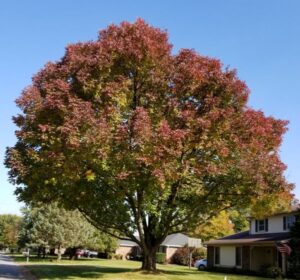 The years passed. The trunk revealed a split. We called the tree doctor who cabled four of its boughs to help it keep growing straight. A nearby lightning strike affected its root system, and the center of the tree sustained damage. We fed it medicine to protect against the emerald ash borer.

As I gazed at its thick trunk, its top twigs leafless in the center, I admired its perseverance. It still provides shade. It’s grown a little lopsided as we pruned away dead wood, and autumn leaves aren’t quite so rich in color, but it’s beautiful anyway. I love it.

How can I love a tree?

You may chuckle at such an idea, but I can give you one better. I love my refrigerator! And for the same reason.

I’ve owned it since 1980, and it wasn’t new when we met. The kind retirees who sold their home to us decided they would leave the refrigerator to this cute young couple with a toddler and a new baby on the way.

Forty-one years later, duct tape serves as the barrier to hold bottles on the shelf in the door. Rust is slowly replacing the glossy appliance paint where the grandchildren have scraped magnets off its exterior and slid them back on again. And decades of humidity have taken their toll. 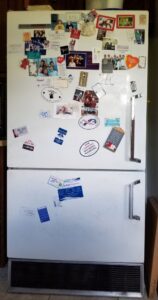 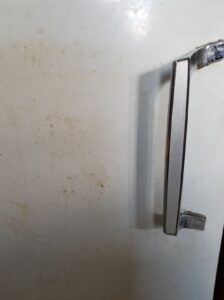 Some twenty years ago, the old thing started to leak (don’t we all?), but before we shopped for something brand new, I pleaded with my husband to call a repairman. “If it costs less than two hundred dollars, let’s fix it.”

The faithful fridge had become my baby.

The repairman arrived, and for the price of the trip fee, he reattached the hose to the defrost unit. My trusty servant has chugged along ever since. Best seventy bucks I ever spent!

I think it’s time I returned the favor and gave it a new coat of paint. After all, as I age, I’ve given in to coloring my hair.

God created my tree, and men built my refrigerator. One is alive, the other manufactured. Neither have consciousness, although some may argue that plants respond to TLC.

However, I am a human being. Human beings are created in God’s image. They are aware of their surroundings, and I believe God has given every person a purpose on earth. The apostle Paul knew his mission contained horrendous hardships, but ultimately all the pain didn’t matter compared to the important job God had given him. (Acts 20:23) He’s a magnificent example of beauty in the midst of ugly while he persevered.

I’m not world famous like Paul. I haven’t yet been asked to endure multiple beatings from a government that hates my message. As I’ve journeyed through life, many days have been easy. I’ve enjoyed long stretches of comfortable breezes. I’ve also been battered by hurricanes of sorrow. Still, I’ve persevered in my service to the Lord, remaining faithful to the tasks He set before me.

Like my tree, I’m no longer perfectly shaped, and while my body doesn’t rust in the same way as a refrigerator, my exterior is flawed by too many unprotected days in the sun. 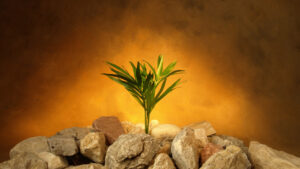 I intend to continue to persevere with a serene spirit. I’ll keep reaching for heaven even as I grow gnarled. I’ll chug along, perhaps not as efficiently as I did in my youth, but with a joyful heart, I’ll still work to fulfill what I believe is God’s purpose for me.

May this be your prayer as well as mine throughout your life:

“Lord, help me to be faithful and serve You for all the years left to me. Help me to persevere.”