Silence Invites Violence: The Power of a Divisive Spirit 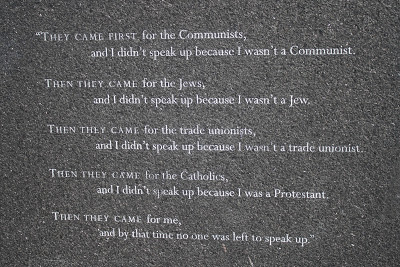 “Those who don’t know history are doomed to repeat it.”
― Edmund Burke

Tomorrow is the anniversary of 9/11, the day our police and firemen were our greatest heroes. What has happened in the last nineteen years? Our heroes have become Enemy Number One on the evening news. I have no direct answer, but I do know an insidious spirit has slithered into our midst.

My last few posts have focused on prayer and healing for our nation. Today, I’m offering a world history lesson as a roundabout attempt to show where this divisive spirit comes from. Ours is not the only era to deal with it.

Let’s start with pre-World War II Europe. Hitler was building his Third Reich. In 1933, leading up to the elections, the police were forbidden to interfere with the many acts of intimidation carried out by the SA who were given the “freedom of the streets.”¹ The spirit of division had targeted Jews as the scapegoat for Germany’s problems.

Nazis were fascists, fascism defined as “a system of government characterized by a rigid, one-party dictatorship, forcible suppression of opposition, private economic enterprise under centralized government control, belligerent nationalism, and militarism.”² They called their political party the National Socialist German Workers. Mussolini, Hitler’s Italian ally, had instituted fascism in 1922, the Republican Fascists. What was the difference between the two? Perhaps the Nazis were more committed to the cause. 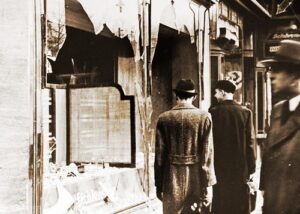 On the night of November 9–10, 1938, Nazis invaded Jewish neighborhoods throughout Germany. Known as Kristallnacht, or The Night of Broken Glass, they destroyed businesses, killed almost a hundred residents, and arrested thirty thousand Jewish men (hence the need for the first concentration camps). Police were ordered to stand down. By the time the war ended, Hitler would be responsible for the genocide of over six million Jews, plus Gypsies, plus those with physical and mental disablities.

Which group do you associate with such behavior in modern America? Antifa or the Tea Party?

“Antifa” comes from “anti-fascist.” Really? Antifa’s behavior for over a hundred days in Portland, Oregon, has consisted of over a hundred nights of broken glass. Other cities have suffered similar riots. Mayors tell the police to stand down or arrest only the most violent, but the rioter is back on the street within a day.

The Tea Party in 2009 was made up of several generations of people who protested–with their voices, not with Molotov cocktails. They wanted relief from over-taxation, among other things. My parents, then in their late seventies, joined that movement. Unlike the debris left behind in every riot, Tea Party members picked up their trash and went home after a peaceful march.

Americans have a choice. Will they exercise their right to peaceful assembly? Or will they protest injustice by pulling down statues, setting things on fire, and beating innocent bystanders? Will they join trained bullies who declare intimidation tactics are necessary for the common good?Or will they stop the bullies from teaching children to love the state more than family? People in Portland, Seattle, Minneapolis, Baltimore, and several cities are afraid to speak out against the violence. Afraid to become Antifa’s or BLM’s next target. (And for the record: BLM is the Marxist organization, while “Black lives matter” is a statement of truth.)

During President Clinton’s administration, the small African country of Rwanda exploded into genocide. The Hutu and Tutsi tribes had lived as uneasy neighbors in the same territory, especially during the colonial times under Belgium. Hutus had the larger population and for the most part were less educated. Tutsis had been favored by Belgium and held the plum jobs in government, which of course led to greased palms and better jobs all around. The spirit of division focused on class warfare as well as tribal feuds.

The savagery of 1994 was not the first clash between the two. There had been pockets of war after Belgian leadershiup departed, but nothing like the fireball of hate that engulfed the whole country that fall. Immaculee Ilibagiza, author of Led By Faith (Hay House, Inc. 2008), said an “evil fog” had descended on people’s hearts. Even people who called themselves Christians attacked their neighbors with machetes. Below is a collection of bones memorializing those who died in the genocide. 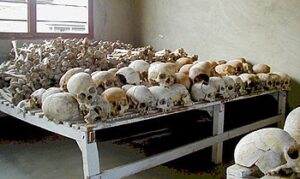 Rwanda’s violent history is rooted in tribalism. America’s shame lies in racism. Both foment hate. Both cause atrocities to the innocent. I fear for America’s future when I see Antifa and BLM threaten those who “enjoy white privilege.” To battle this spirit of division between the races, we need to cling to the words of Jesus and reflect His love. We need to pray for God’s help. We need to work toward making relationships better, rather than destroying them.

The people didn’t speak up when Hitler enslaved and killed their Jewish neighbors. Germans paid the consequences for their silence, becoming a nation divided and controlled by four other nations.

The Rwandan people didn’t speak up for their neighbors from a different tribe. First, the Tutsis were annihilated, then the Hutus ran for their lives when revenge called. 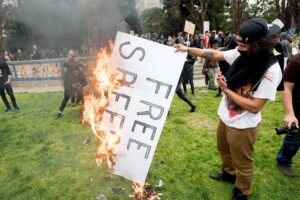 Americans can’t remain silent and hope the storm of “Defund the Police” will pass them by. Consequences will be harsh. While we still have our freedom, decent people need to work together, to love each other as brothers and sisters, and find a peaceful, common ground where all races will be treated fairly. To move forward with God’s blessing.

In the last hundred years, Marxist/Fascist bullies have destroyed any hope of freedom in Russia, its satellite nations, in China, Vietnam, Cambodia, Laos, Burma, North Korea, Cuba, and most recently in Venezuela and Hong Kong.

If you did not know about the historical abominations I’ve shared here, please study them and pass them on. Speak up. Teach your children. Our lives may depend on it someday.

The only thing necessary for the triumph of evil is for good men to do nothing.”
― Edmund Burke