The Fifty-Year-Old Question For My Deaf Sister 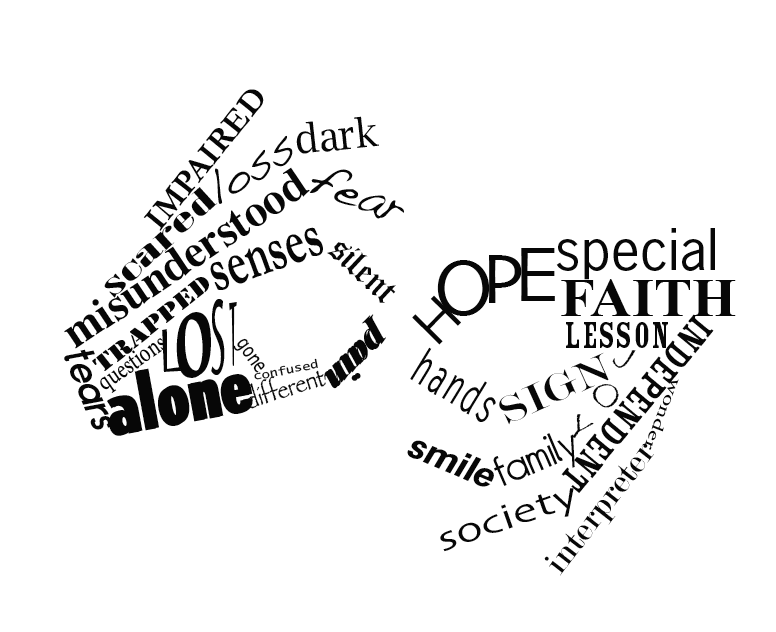 There are many moments in my books when Debbie (who can hear) wonders what Krista (who is deaf) might be thinking. The child had no language. Tantrums occurred on a regular basis, and the rest of the family tried hard via charades to figure out what she wanted. But they couldn’t ask her feelings about deafness in a hearing world. She didn’t know how to tell them.
The question returned to my mind over and over as I wrote the World Without Sound series. How does my sister feel when she’s left out of conversations in the hearing world? Lost? Angry? Resigned?

She agreed to an interview.

Me: When you are in a crowd and people leave you out of the conversation, you seem to take it in stride. I never see you angry or sad. What are you feeling in those times? And did you feel differently as a kid?

K: I was a quiet child. I did not let it bother me; however, I was afraid. I did not understand what was going on during the family dinner time because I did not acquire a spoken language or sign language at the time. Also, I felt left out. (It’s always been that way for deaf people.). When I got older, I acquired some spoken language, and I got curious about what they were saying. Mom interpreted for me (but not everything).

Me: So, when you were little, you said you were afraid. Afraid of what?

K: I am not sure why I was afraid. Maybe I was afraid of my future–what if I never acquired? Or if my acquired language was limited? That was my fear.

Me: And because you couldn’t express that in language back then, we never knew your exact fears.
I’ve only ever attended one Deaf social event with you, and I felt totally lost. All those flying fingers talking in sign language! There was no way for me to follow signs that rapidly. Did you get a niggling sense of satisfaction when the tables were turned?

K: Not really. I was satisfied because you were with me at the Deaf social event. And because it was only ONE time, that is why you are afraid to go out and taste a unique experience of deaf people around you.

Me: (feeling sheepish): That’s true. I am very afraid of annoying them. At one point, I sought a tutor with a Facebook group. I warned the man I was very slow at ASL. He had no patience with me. You have been more than patient! How would you advise a Deaf person and a hearing person when they are doing ASL lessons together?

K: Actually, I would directly advise a hearing person to look for the right Deaf person who is willing with full heart to teach no matter how slow the learner is

When did your deaf school get serious about Total Communication, using both oral language and ASL?

K: Total Communication was used in the 1970s through 1990s. Today’s program is called Bi-Bi Approach—Bilingual and Bicultural. My school started their program in 1989, I think. Some Deaf schools use literacy programs for both acquisition of written English and ASL. A few Deaf schools and public schools with deaf programs currently use oral systems.

Me: Did you have friends whose parents refused to sign? Or the opposite–the parents became fluent in ASL?

K: Yes to both questions. Ninety-five percent of hearing parents tried their best to use sign language, not fluently. I started using ASL at almost eight years old. I got frustrated with Mom, so she took an ASL class, and that was when I was ten. But I only knew of a few parents who refused to learn any sign language.

Me: How did your high school help the Deaf students in the classroom? Was that a first attempt to mainstream deaf students into the hearing population?

K: Understand, not all Deaf students are mainstreamed. Some are in a self-contained classroom due to delayed language.
In my case, Cleary School collaborated with Mercy High School before my eighth grade graduation. My kindergarten teacher became a coordinator for the Deaf program at Mercy. I guess she did the placement for all Deaf students who were either mainstreamed or in a self-contained classroom. However, I am sure there were many hearing schools with Deaf programs that provided inclusion or mainstream before I was fully mainstreamed at Mercy.

And there were some Deaf students who experienced being alone in mainstream schools. Some felt completely left out. Others, fortunately, received sufficient support from teachers and parents. Some had interpreters; others didn’t.

For a short time, I mainstreamed in fourth grade, and I felt left out. No social interaction and a lack of interpreters. Mom pushed me too far that I did not want to go to public school in the first place. I knew I would be left out. I did not belong in any public schools at that time. I went back to Cleary.

And after fifty years, I finally have the answer to my question.

I kind of knew the answer before I asked.

My sister, like others in the Deaf community, feels left out when it comes to participating in the hearing world. The debate continues: force the Deaf to assimilate or accommodate with sign language?

Krista has adapted to both, and she offers grace to all.