The Pledge of Allegiance: What Does It Mean? 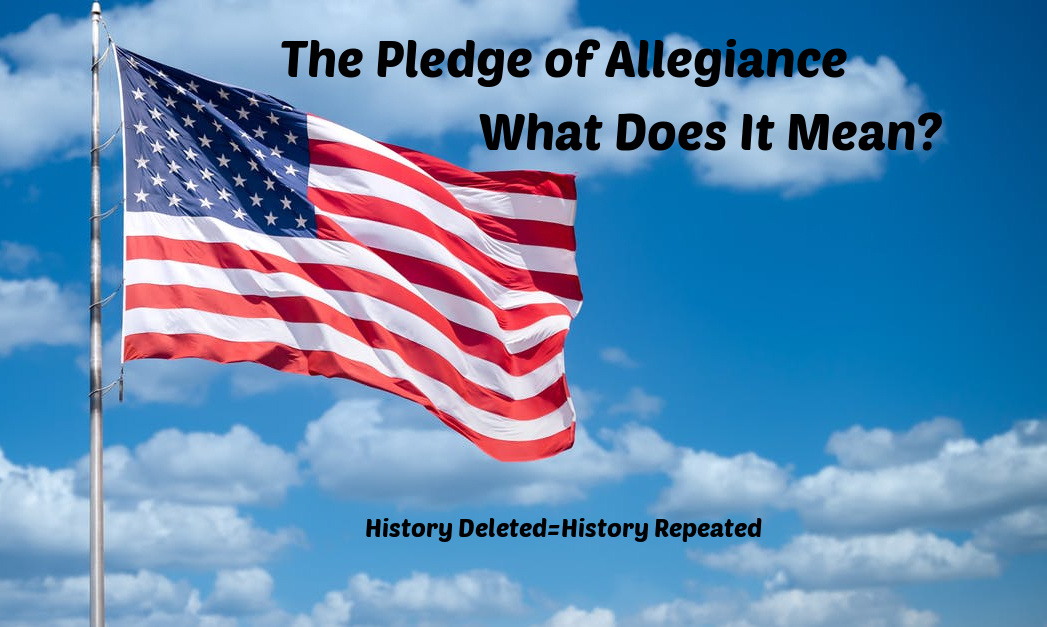 I made a rare exception by sharing this from my Do Not Delete page. Red Skelton alone makes the read worth your time!

I entered first grade in September of 1960. Aside from my fascination with the letter M card, the thing I remember the most was the beginning of each day. We stood, faced the flag, and recited the Pledge of Allegiance. I had memorized it in kindergarten, and in my five-year-old heart, stating my love for America was almost the most important thing I could do. After all, my daddy flew jet planes every day because he loved America! 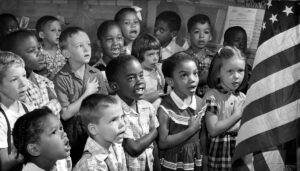 Right after the pledge, my teacher said a prayer to start our day. Well, that was the most important thing. I wanted God helping me and my classmates. Can you tell I was a very serious little girl?

In 1962, my teacher made an announcement. “We will no longer pray after we say the Pledge of Allegiance. However, if you want to say your own prayer, we will have a moment of silence, and you may say your prayer in your head.”

I wasn’t upset. Surprised maybe. But kids never know why grown-ups do what they do, and I made sure I said my quick (very quick) prayer in the moment that was allowed. I prayed that prayer all the way through high school: “God, please help me be good and the others be good, too. And help me get good grades. Amen.”

As the Cold War intensified through the dark harmonies of saber-rattling and shoes slammed on tables, bestselling novelist James Clavell (of Shogun fame), wrote The Children’s Story. He’d spoken with his young daughter and realized she had no knowledge of the meaning of the Pledge of Allegiance. World War II was barely in America’s rear view window, and Clavell remembered how Hitler had molded the minds of German and Austrian children, Kruschev was doing the same in the Soviet Union. 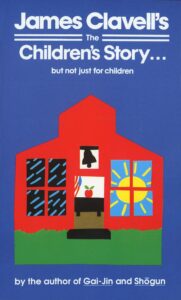 The Children’s Story is still sold today—the tale of a classroom under the  supervision of their enemy, and how the children were drawn to their new teacher’s communist point of view in twenty-five minutes. Chilling.

During the Vietnam War years, Americans who hated America were given a strong voice in the press. The general population could either turn off the news or watch the screen, horrified, as protesters burned the flag and spit on military veterans. Their vitriol taught many in the next generation to maintain the rage.

In 1969, comedian Red Skelton used his platform to offer the nation a lesson in the meaning of the Pledge of Allegiance. It’s three and a half minutes long, definitely worth your time. Click here.

I have my own little glossary of terms that Americans need to remember:

United = many joined together for the same purpose.

Republic = a government where a few representatives make the laws and lead the nation. They are elected by the people.* EXAMPLE: ancient Rome

Democracy = a government where all the people rule. * EXAMPLE: ancient Greece

*NOTE: Republics are usually stable while democracies quickly dissolve into mob rule. The Roman republic would’ve lasted longer if not for the senators who devolved into greedy, power-hungry tyrants.

One nation under God = a deity is acknowledged but not forced upon the citizens.

Indivisible = can’t be driven apart. Different opinions do not divide the nation; forcing others to accept your opinions is what causes division.

Things have gone downhill since that first rupture between prayer and the public school.The last time I stepped into a public school classroom (2007), they were still reciting the Pledge of Allegiance, but kids didn’t have to if they didn’t want to. No one insisted students stand and show respect for the flag either. While most of the elementary classes appeared similar to my own school experiences, junior high and high school classrooms were a different story. Students felt free to cop an attitude while the voice on the intercom did its duty. 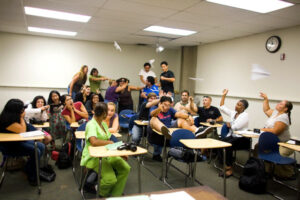 Did my parents protest the removal of prayers from school? No. They went along with the idea that faith should remain in the home. America has paid for their generation’s complacency. If we continue to remain placid and compliant, allowing others to erase recorded history and replace it with another, we will lose future generations to a form of enslavement that the United States never experienced before. I’ll follow up with more details next month on this Do Not Delete page.

One hundred and sixty-one years ago, we engaged in a war to free the slaves so everyone could truly be equal. If we allow a group to take away our freedoms and instill new prejudices in our children, we will no longer have a population who wants to pledge allegiance to their country. We will be a republic in name only. We will be indivisible only because we fear dissent will put us in prison. Liberty and justice for all will be the whisper of legend. Or forgotten altogether.