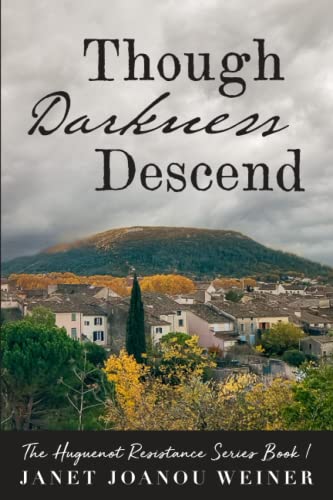 Both Sarah Soon and Janet Joanou Weiner are writer friends of mine. Janet’s first book came out this year—historical fiction set in France during the reign of Louis XIV. Though Darkness Descend focuses on the persecution of the French Hugenots, a fascinating and little known nugget of history.  Sarah posted this original interview and  book review on her own website and has graciously allowed me to share her post.

Where is God in the Midst of Suffering? NOTE: I met Janet through a writer’s group, Lady Lits. Janet has an elegant demeanor and effusive joy. As she’d share about her historical fiction novel, I was intrigued and purchased it as soon as it was released. I highly recommend subscribing to her newsletter (link at the bottom). She shares about her life in southern France, gorgeous pictures of this region, and the historical backdrop for her novel.

I enjoyed reading Though Darkness Descend, especially the beautiful setting, courage of the Huguenots, and her protagonist’s difficult but inspiring journey.

Persecution of the Huguenots is intensifying in 17th century France.

What will be the cost of her unbelief?

Jeanne Tessier is not willing to die for a faith she doesn’t possess. Where was God when she desperately needed him? In her darkest hour, he didn’t seem to hear or care.

Until now, Jeanne has kept her lack of belief hidden from her Huguenot community. But with the imminent threat of twelve hundred dragoon soldiers sent by King Louis XIV to suppress them, she faces upheaval in every area of her life–including her hope of marrying Etienne.

Fighting for her way of life, she follows Etienne, despite her close friend Pierre’s wishes and warnings. When the dragoons move into her home, the Château de Planque, Jeanne discovers where God is in suffering and death, who she truly is, and whom she truly loves.

My debut historical fiction novel came out in January of this year. I am amazed and grateful to God for this fulfillment of a long-held dream. Now for Book 2 in the series! I live in an ancient château in a small town in southern France with a rich history. This region has been a bastion of French Protestants (Huguenots) dating back to the 16th century. At that time in western-European history, there was no other form of Christianity, which rendered the Huguenots suspicious to those in power. For two centuries, the kings of France subjected them to severe restrictions and repression.

Persecution for our beliefs is nothing new under the sun. Yet, there is great inspiration to be found when diving into the actual events of Huguenot resistance. Indeed, the World War II resistance movement drew its name from a Huguenot descendant.

The stubbornly faithful Huguenots stood firm and held to their faith despite tremendous pressure and deprivation. Dragoon soldiers seized women who refused to convert and imprisoned them for life. They chained condemned men to the galley boats of Marseille until death––which usually occurred in less than two years. Children were considered illegitimate as their parents’ marriage was outside the one established church. Authorities sent them to convents to be reeducated at the parents’ expense.

While most of us have not known this level of suffering, we all have our own stories to tell. Several years ago, during an incredibly challenging time in our family, I came to a full stop as we worshipped one Sunday. I simply couldn’t finish the sentence. The lyrics emphasized God’s goodness, and my heart wouldn’t let me continue. How could that be true when he allowed me to experience such searing pain?

Until that moment, I hadn’t realized I’d lost a lot of trust in him. I hadn’t been unfaithful or made bad choices, but here I was suffering. Why? Where was my heavenly Father? Doesn’t he promise us protection if we follow him?

Those questions led me on a journey back to trust. God is always good, always faithful, no matter what happens in life. I thought the answers to why the difficult circumstances existed would bring me peace, but that’s not the case. Only he, only his loving presence amidst the darkness and confusion, lifted me out of the fog and set my feet on firm ground.

Jeanne, the main character in my novel, Though Darkness Descend, undergoes a similar journey. Surrounded by external forces far more vicious than anything I’ve yet experienced, she discovers true life––and true love.

May we know this truth deeply, no matter our circumstances.

Website:  Fig & Vine Blog: Life and Beauty in the South of France Janet Joanou Weiner is an American living in France for almost twenty years. She makes her home in the 500-year-old Château de Planque with her husband and their mission organization. Daily, she wishes the walls would tell her all the stories.

While she greatly misses her four grown children and four grandchildren who all live in the US, she loves her life in the small south of France town. Surrounded by ancient stories and beauty of many facets, she treasures the constant flow of inspiration.