In 1914, Britain, France, and Russia united to stop the greedy German kaiser. Surely, they’d have him running for home, his tail between his legs by Christmas.

But Christmas found both armies weary, wet, and cold. Their hopes for protection lay in underground  bunkers and trenches dug into  the earth, corridors to allow communications among the troops. If anything moved above ground, the enemy shot to kill.

Can you imagine the hatred? The bitterness? The exhaustion? Thousands of men stuck in a form of hell on earth.

As troops settled into a miserable Christmas Eve along the western front, the Allied soldiers heard something familiar. A Christmas carol. But sung in German. The British joined the song. Two opposing armies, each with a Christian heritage, worshiping their Lord and Savior on the night commemorating His birth.

The song died away, and a call came from the opposite camp. “Let’s meet in the middle of No Man’s Land.” 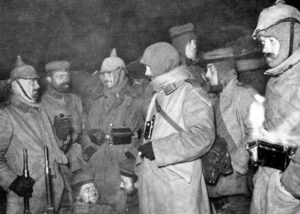 In pockets all along the front, one side ventured out of the trenches, arms up to show no weapons, and the enemy climbed out of their trenches to meet them. They sang the carols together. They traded gifts of cigarettes and food. They shook hands and returned to their trenches. On December 26th, the slaughter began again.

The Christmases of 1915 through 1917 found no moments of peace. Both Allied and Central leaders threatened soldiers if they dared to create an impromptu truce. We only know this Christmas miracle happened because soldiers wrote home about it.

Once again, the official declaration was: No impromptu truce on Christmas. We. Are. At. War.

But one individual’s story has survived the decades, and perhaps, there are many more never recorded.

On Christmas Eve 1944, three American soldiers were lost in the Ardennes forest. One was badly wounded. They finally found a cabin in the woods, but it was occupied by a German woman and her twelve-year-old son, Elisabeth and Fritz Vincken. Elisabeth’s husband had sent them to the hunting cabin after their bakery in Aachen had been bombed. 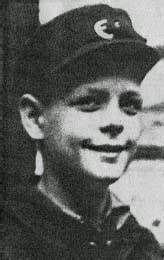 When the Americans knocked on the cabin door, Elisabeth allowed them in, although not without hesitation. Harboring the enemy was a crime punishable by death. She sent Fritz to the shed for six more potatoes and for Hermann the rooster. Hermann, named after Hermann Goering whom Elisabeth didn’t like, had gained a reprieve as the main course for Christmas dinner until her husband was able to make it through the snow to the cabin. Now that guests had arrived, the reprieve was rescinded.

While Hermann roasted, another knock sounded on the door. This time, four armed German soldiers stood on her front porch. Elisabeth stepped outside and explained the situation. The men were not too happy, but they, like the Americans, were lost and cold. Elisabeth presented her terms–they were welcome to come in if they left their weapons outside.
The German corporal agreed, “It is the Holy Night. There will be no shooting here.”
One of his soldiers, a former medical student, tended to the wounded enemy. Elisabeth retrieved the Americans’ rifles and left them on the porch.
Over dinner, the tense atmosphere evaporated. The German soldiers shared a bottle of wine and a loaf of bread with everyone at the table. The Americans offered instant coffee. Hermann was delicious.

“There were tears in her eyes and as I looked around the table, I saw that the battle-weary soldiers were filled with emotion. Now they were boys again, some from America, some from Germany, all far from home.”

The next morning, as both groups studied their maps, the German corporal gave the Americans his compass and directions back to their lines. Elisabeth returned everyone’s weapons and promised to pray for them.
According to Fritz, “The soldiers shook hands and walked off in opposite directions.”
If you want to know a few more details, and find out if Fritz and his mother ever met any of the seven soldiers after the war, check out the link here.

A Christmas Truce for Today

America is in the middle of a cultural civil war. The Democratic and Republican leadership hate each other. Liberals and conservatives wage a war of words. Vaxxers and anti-vaxxers resent one another. And dozens, if not hundreds of other issues divide us.

Can we take time to join with our “enemies” and experience peace together during this holy season? If deadly foes can climb out of filthy trenches and sing songs praising the birth of Christ, can we meet with those who disagree with us and worship Jesus together at a Christmas service? If individuals on opposite sides of a battle can sit down to a humble Christmas dinner and recognize each other’s humanity, can we in America, sit down with infuriating relatives and enjoy an elaborate feast?

As the German soldier said, “It is the holy night.”

Shake hands. Share a glass. Wish each other well.

Instead of “History deleted equals history repeated,” let’s remember the above two stories and repeat them over and over.