Negotiations, Appeasement, and the World Watches

In 1938, Prime Minister Neville Chamberlain of Britain negotiated an agreement with Hitler in order to halt Nazi aggression. Negotiations. Appeasement. And the world watched. The result: World War II. 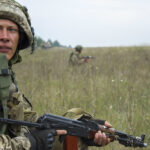 If you’ve listened to pundits on radio or television, you’ll hear comparisons of Putin’s attack on Ukraine to Hitler’s aggression toward neighboring nations through the 1930s. They’re not wrong. Arnaldo Teodorani lists several actions by Germany and others as the world tried to negotiate with bullies.

1931. Japan invaded Manchuria, a region in China. The West didn’t want to lose trade with Japan, so they did not want to put economic sanctions in place. The world watched.

1934. In power less than a year, Hitler attempted to annex Austria. Mussolini, allied to Vienna, sent in his military, and the German Wehrmacht halted their invasion.

2022. Taking advantage of weak leadership in the West, Putin decides he can bring Ukraine back into Russia, and no one will fight him. He doesn’t appear to be ready for full-scale war, expecting his prey to surrender immediately.

1935. Italy invaded Ethiopia. The British people wanted to shut down the Suez Canal to cripple Italy’s efforts, but Chamberlain didn’t want Mussolini to join with Hitler. Instead, he handed over the mess to the League of Nations, who spent a lot of time talking and no time acting on behalf of Ethiopia. While the world watched, the African nation fell to Italy a year later.

2022. Iran speaks out in support of Russia’s efforts to annex Ukraine. Meanwhile, the U.S. leadership wants to continue negotiations for a nuclear treaty with Iran. Why? “Making nice,” appeasement, won’t turn Iran from its hatred of the West. Adding insult to injury, apparently, Russia and Iran talk things out behind closed doors without American participation in the actual negotiations!

1936. While the West squabbled with Italy, Hitler invaded the demilitarized zone in the Rhineland as set up by the 1921 Versailles Treaty. Portions of the Netherlands, Belgium, and Luxembourg were affected. Less than twenty years had passed since World War I had come to an end. The West didn’t want to fight again, but if the British or French had sent assistance, Germany would’ve withdrawn. It was not yet ready for war either. The invading army carried blanks, not bullets.

2022. Putin threatens the West with possible nuclear or chemical warfare. America is tired of war. They just stumbled out of Afghanistan. However, Putin doesn’t seem to be fully prepared for war yet, and Western leaders need to discern whether his threats to raise the stakes with nuclear annihilation are bluff or true intent.

2000. Putin invaded Chechnya. He followed with Georgia in 2008 and Crimea (formerly part of Ukraine) in 2014. The world watched.

1938. Hitler successfully annexed Austria. By this time, Italy had joined the Axis powers and would not help. The West didn’t help either. Hitler picked up his pace, taking the Sudetenland,which lay within the confines of Czechoslovakia. Since so many German-speaking people lived in those areas, Hitler declared they “belonged” to Germany. And the world watched.

2022. Putin declares eastern portions of The Ukraine belong to Russia because so many Russians live there.

1938. Chamberlain felt badly about the harsh punishment of Germany in the Versailles Treaty after World War I. He sympathized with the Germans who lived in those disputed areas of the Sudetenland, so he opted for appeasement and went along with Hitler’s policy of “self-determination.” Since the German military was not yet in full agreement with Hitler, a different decision by Britain might have changed the course of events. In October, when Chamberlain returned from negotiations, he triumphantly held up the signed agreement averting war with Germany. What did it cost? The freedom of Czechoslovakia. 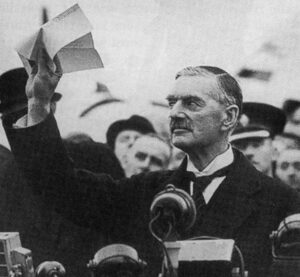 Winston Churchill spared no words for the prime minister. “You were given the choice between war and dishonour. You chose dishonour, and you will have war.”

And what did Hitler think of Chamberlain’s hard-won agreement? “It’s just a scrap of paper, ” he said.

And the world watched. And waited. And hoped. And went to war.