Prepared and Armed, Strong and Determined

“It is the fate of our generation that our life requires that we be always prepared and armed, strong and determined, for if the sword be struck from our grasp, we shall die.”

Israeli leader, Moshe Dayan, stated those words in 1956 during the Suez Crisis. He had commanded the Jerusalem front while in his early thirties when Israel fought the war to affirm their statehood in 1948. By 1967, he was the Defense Minister who directed operations for the astoundingly successful Six-Day War. 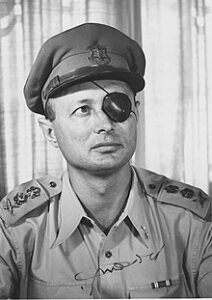 That victory was savored a little too long. Dayan and other Israeli leaders forgot the warning to stay prepared, and in 1973, Israeli forces were observing Yom Kippur when Egypt attacked. For the first time since its recognition as a sovereign nation, Israel needed help from the United States to beat back the enemy.

The antisemitism from the countries bordering Israel remains ferocious, but this scourge of hatred can be found other places through history as well. Most famously in the 1930s and 40s when Hitler sought to annihilate the Jews once and for all.

Antisemitism has been relatively rare in America. It certainly exists. As long as there are human beings, some of them will hate others for no good reason. However, FBI statistics show there’s been a rise of antisemitic crimes since the start of the twenty-first century.

At first, we were horrified to read that such a thing could happen.

In the 1970s we’d started to make great strides in overcoming the racial divide and had maintained steady progress. Read the books and essays of those who marched with Martin Luther King, Jr., and they’ll tell you how much was accomplished. By 2014 or so, we began to ask ourselves what could be causing neo-Nazism to rear its ugly head. I’ve never come upon an analysis of the answer to that question, but by 2020, we simply shook our heads at the latest muggings of Hassidic Jews in New York and terrorist attacks on synagogues across the country.

Prepared, armed, strong, and determined. The rest of the peace-loving world needs to heed Dayan’s words, especially if we are sympathetic to Israel’s existence..

Below is a list of antisemitism throughout history. It never ended well for the aggressors. As Frederick the Great said, “No nation ever persecuted the Jew and prospered.”